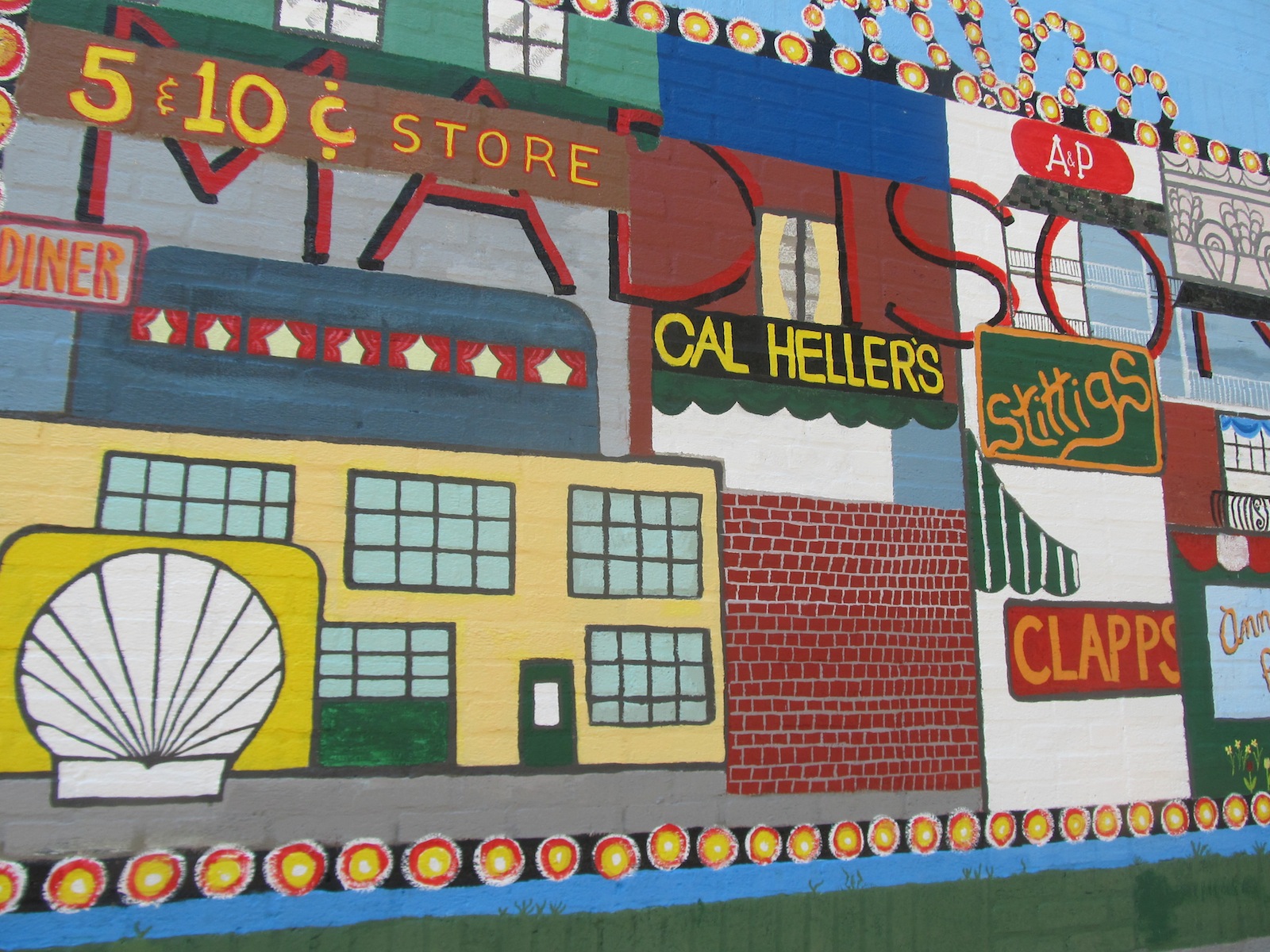 mural detail
Small businesses bring heart and identity to the Pine Hills neighborhood. It was that spirit of community that resident Constance Dwyer Heiden tried to capture in the mural she designed for the side of Mack's Drugs — now a CVS — on South Main Avenue in 1977.

Now the mural she created as a tribute to the landmarks of her childhood has become a neighborhood landmark itself.

Heiden was 3 when her family settled in Pine Hills in the 1950s. "We were the first generation that turned it over," she said. "The other neighbors were ancient. They had servants." As she grew, she formed neighborhood friendships that have lasted a lifetime.

After graduating from the Vincentian Institute in 1969, Heiden left Albany for a few years. Getting out of town, she said, helped her "appreciate how nice it is to know people and have people know you. Having connections."

It was around 1975 that Heiden, an artist, got involved with the City Arts Office. 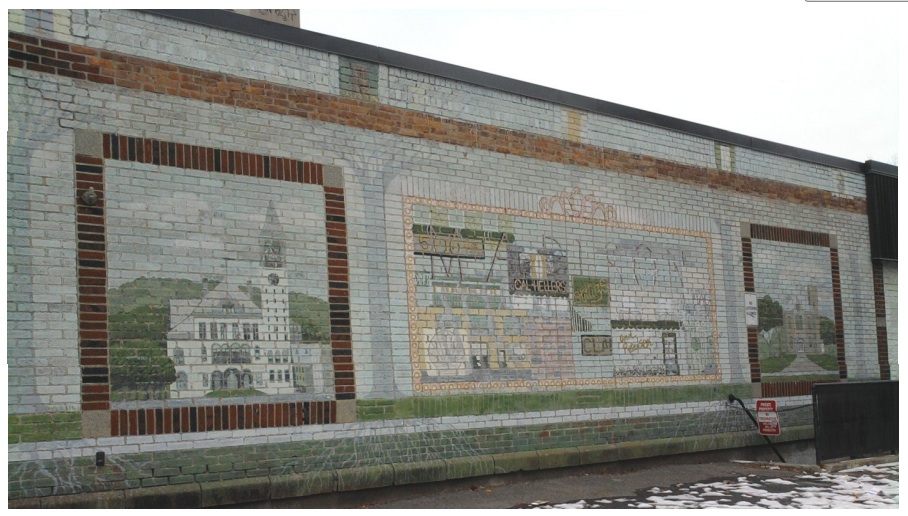 The mural as it looked before restoration.
Fueled with funds from the federal Comprehensive Employment Training Act, the arts office hired artists to create public art and arts programming in the city through the 1970s and '80s. The program also gave arts-related employment to "recovering heroin addicts, local teenagers and others," as the Times Union put it in a 1991 article.

Jack McEneny, now retired from a career in the state Assembly, was a driving force behind the City Arts Office and its projects. The murals were his idea. He told the Times Union, also in 1991, that he was inspired by murals he'd seen in Mexico while training for the Peace Corps.

About 60 murals were completed around Albany. Most of them were indoors, in public buildings, but some were on the outside of privately owned buildings.

When Heiden learned the arts office was considering the side of Mack's Drugs for one of its murals, she knew she had to get involved. After all, she'd grown up just across the street. 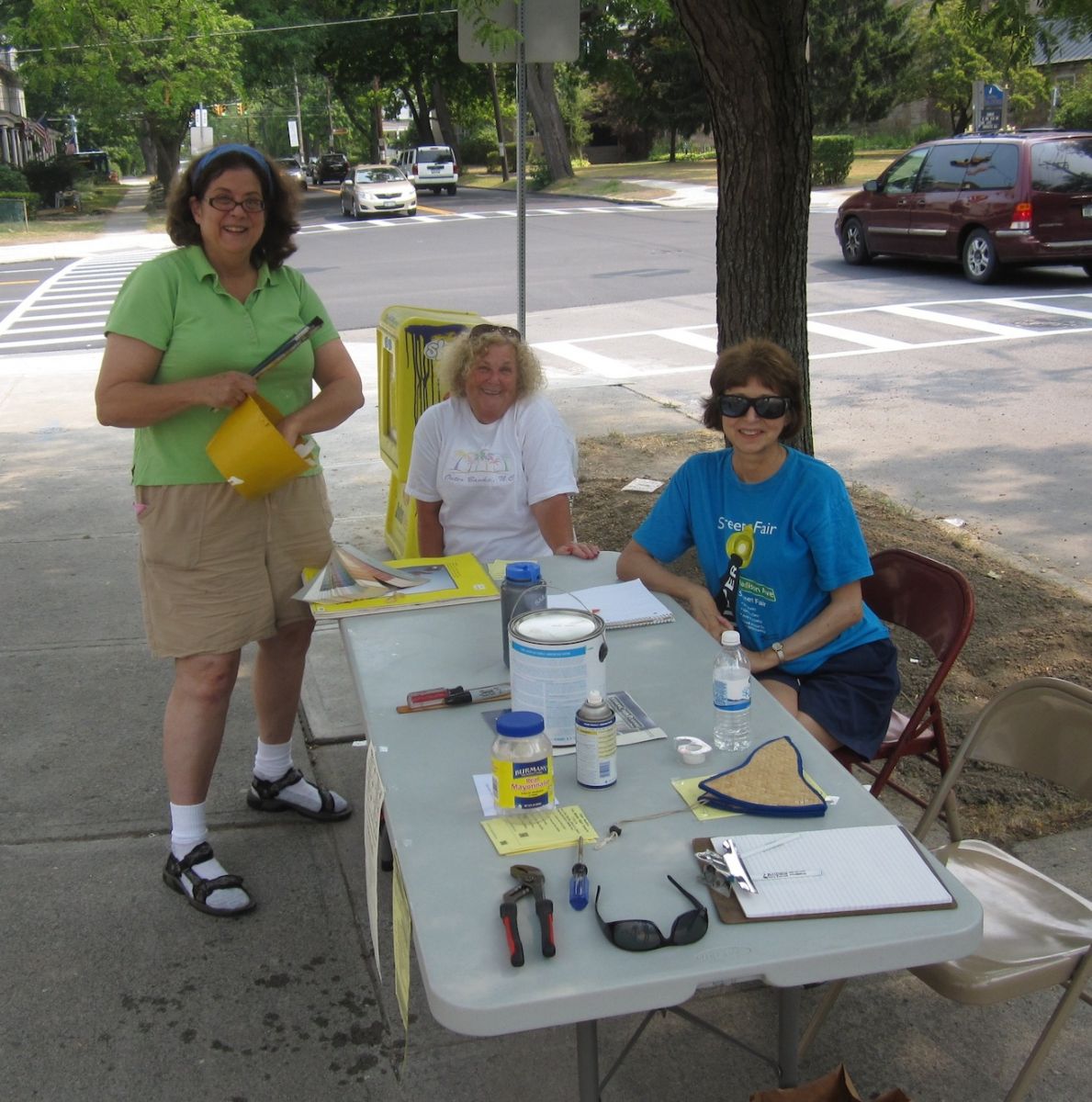 The mural's original artist, Connie Heiden, is seen at left.
"There was no doubt about it," she said. "This was my baby."

She wanted to make the mural an "homage to the neighborhood" she grew up in. The design, she determined, needed to convey the sense of community that was one of the neighborhood's strengths. Her plan came to her in a flash: a collage of businesses.

"How many hours I'd spent in Mack's Drugstore and Stittig's and the Petit Paris, and Ann Petersen's — we'd go there to get our hair cut," she said. "Mom would run out of something and we'd have to run over to Cal Heller's, a narrow store where the groceries were stacked up to the ceiling."

The design "paid tribute to the wonderful little businesses that made up this community. ... And I was so convinced it was what needed to be here."

The mural is in three main sections: One depicts City Hall; another showcases a Pine Hills landmark, the Steamer 10 firehouse. The center section is a collage of businesses: Clapp's bookstore. Stittig's, whose ice cream people still rave about, and the Madison Theatre. Flanking the panels are trees, because, as Heiden says, "We have to have roots so we can grow and branch out." 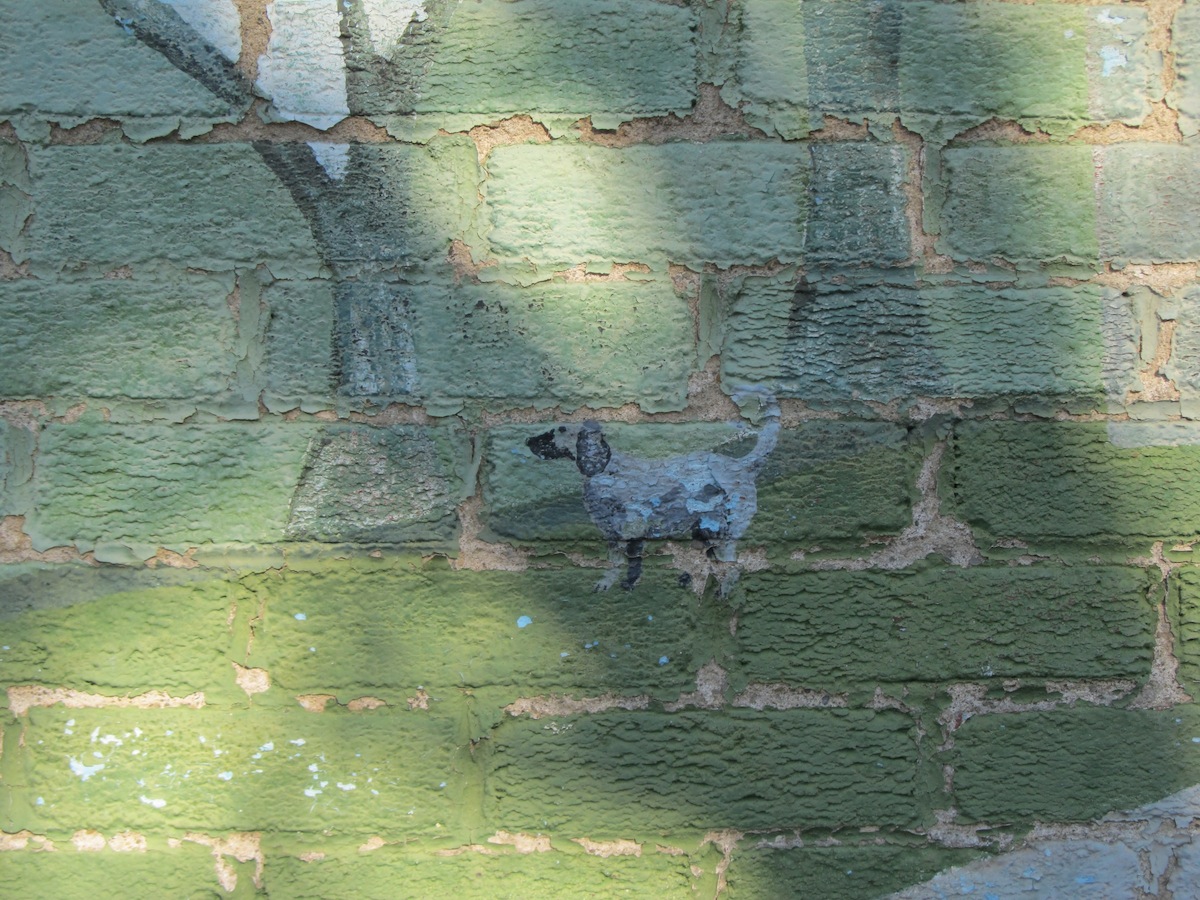 Jack McEneny's dog stood in front of the Steamer 10 firehouse on the original mural.
And there are plenty of little surprises. Along the top are the address numbers of houses that were significant in Heiden's life: those of family friends, her own childhood home. And the dog in front of Steamer 10? It was McEneny's.

The murals were never meant to last forever: Under the program, building owners agreed to maintain them for a decade.

By the time it was 35 years old the Pine Hills mural was not in great shape: The paint had flaked off the mortar; colors and details had faded.

That's when the Beautify Upper Madison Project stepped in to coordinate an effort to restore it.

"This neighborhood has always engendered lots of loyalty," said Virginia Hammer, co-chair of the neighborhood improvement group. Restoring the mural would draw attention to "what was great about the past and what people remember." 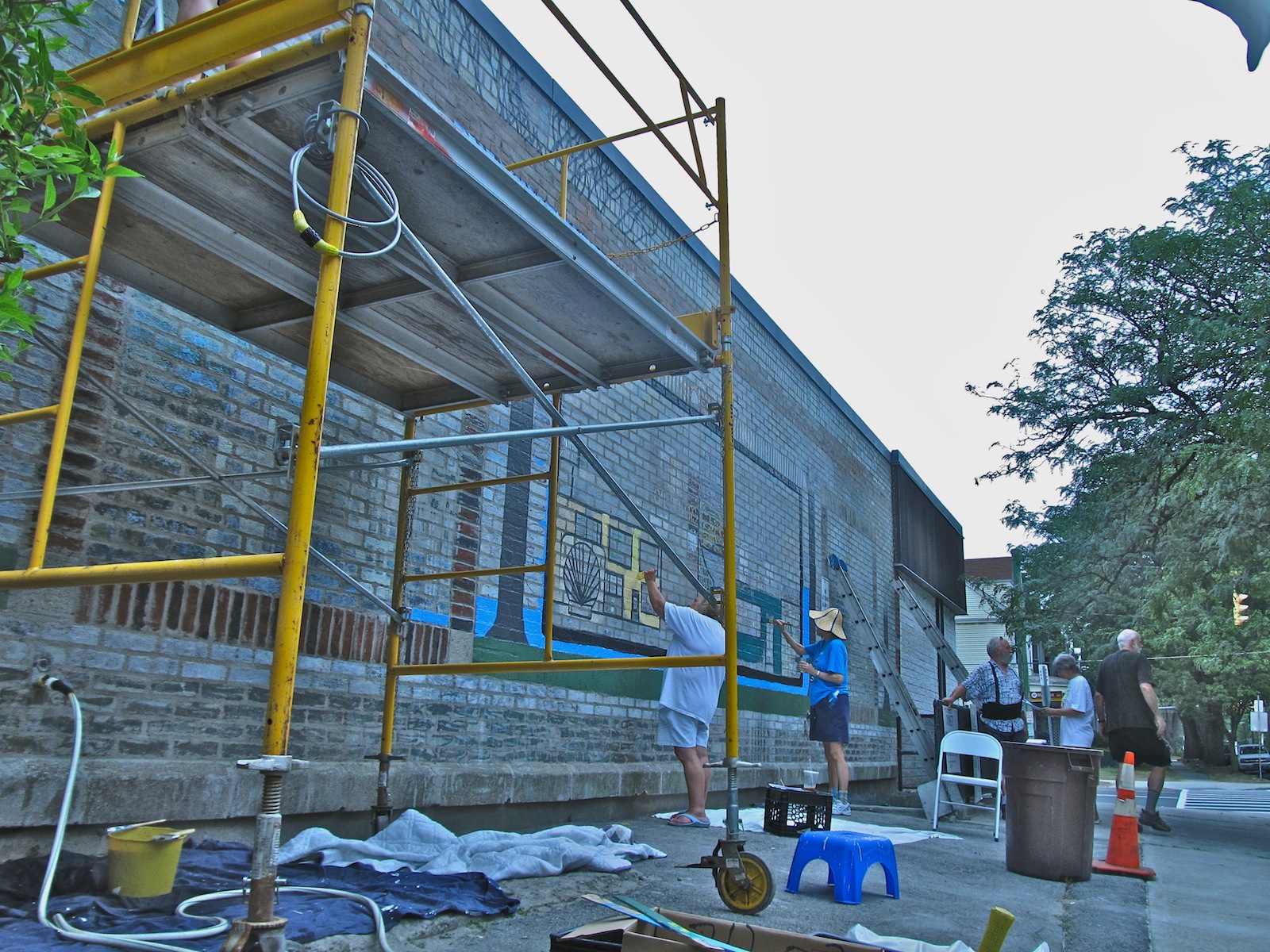 In the summer of 2012 the wall was blasted to remove loose paint and the bricks were repointed. By then there was little left of the original design. So the original artist, who now lives in Lancaster, Pa., returned to Albany to guide a team of volunteers in repainting the mural.

"It was pretty astonishing to realize it had become an icon for the neighborhood," Heiden told the Times Union. "That was a lot of fun." 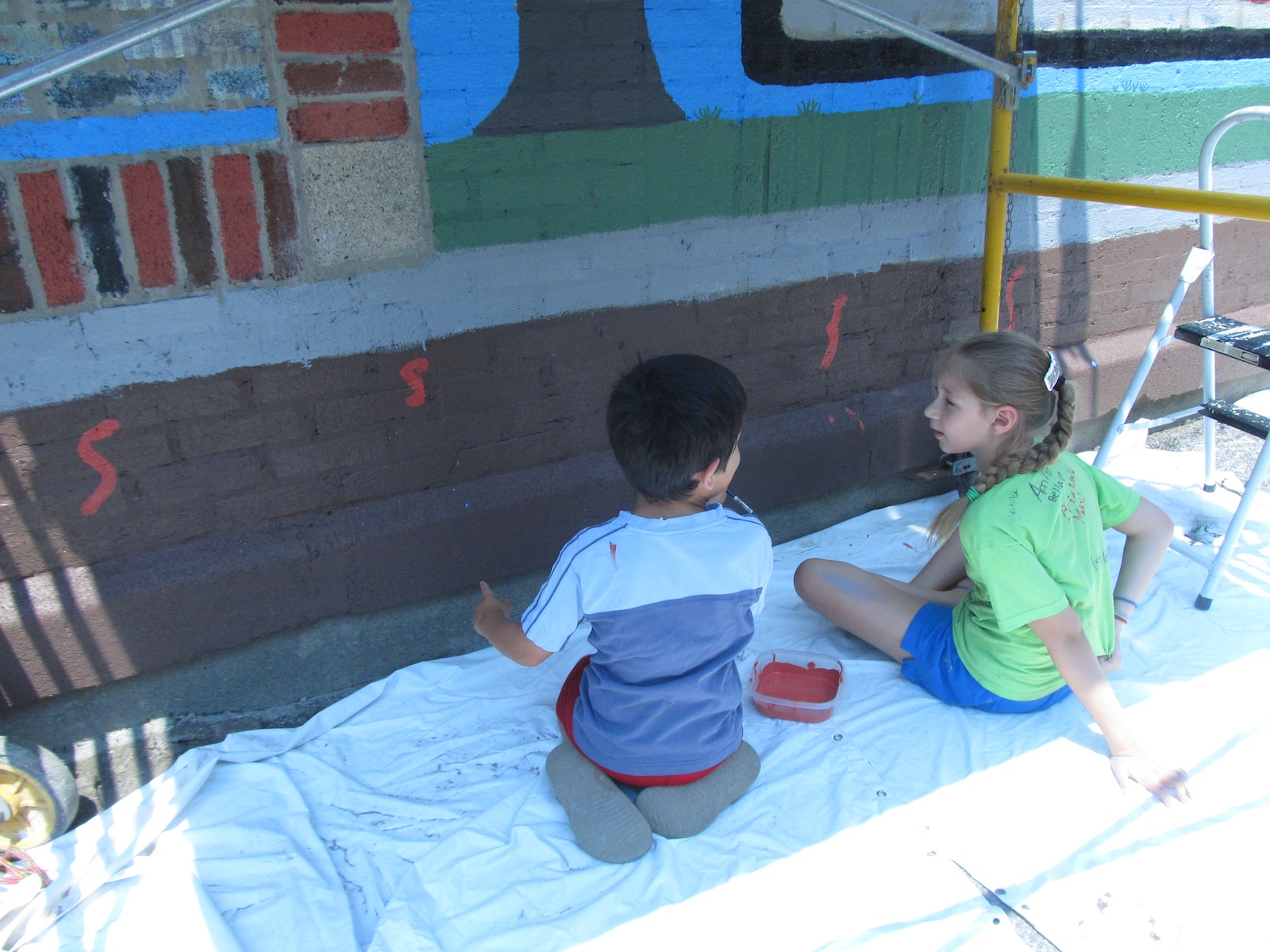 A team of a few dozen volunteers repainted the mural over a hot July Saturday and Sunday. All weekend, passers-by stopped to share stories of Upper Madison's old businesses.

The mural was rededicated on August 3, 2012, crisp, colorful, and ready to be a Pine Hills landmark for the next generation.

Adapted from the Times Union article “Mural's restoration will capture the spirit of community in Albany” by Akum Norder, which ran March 22, 2012. 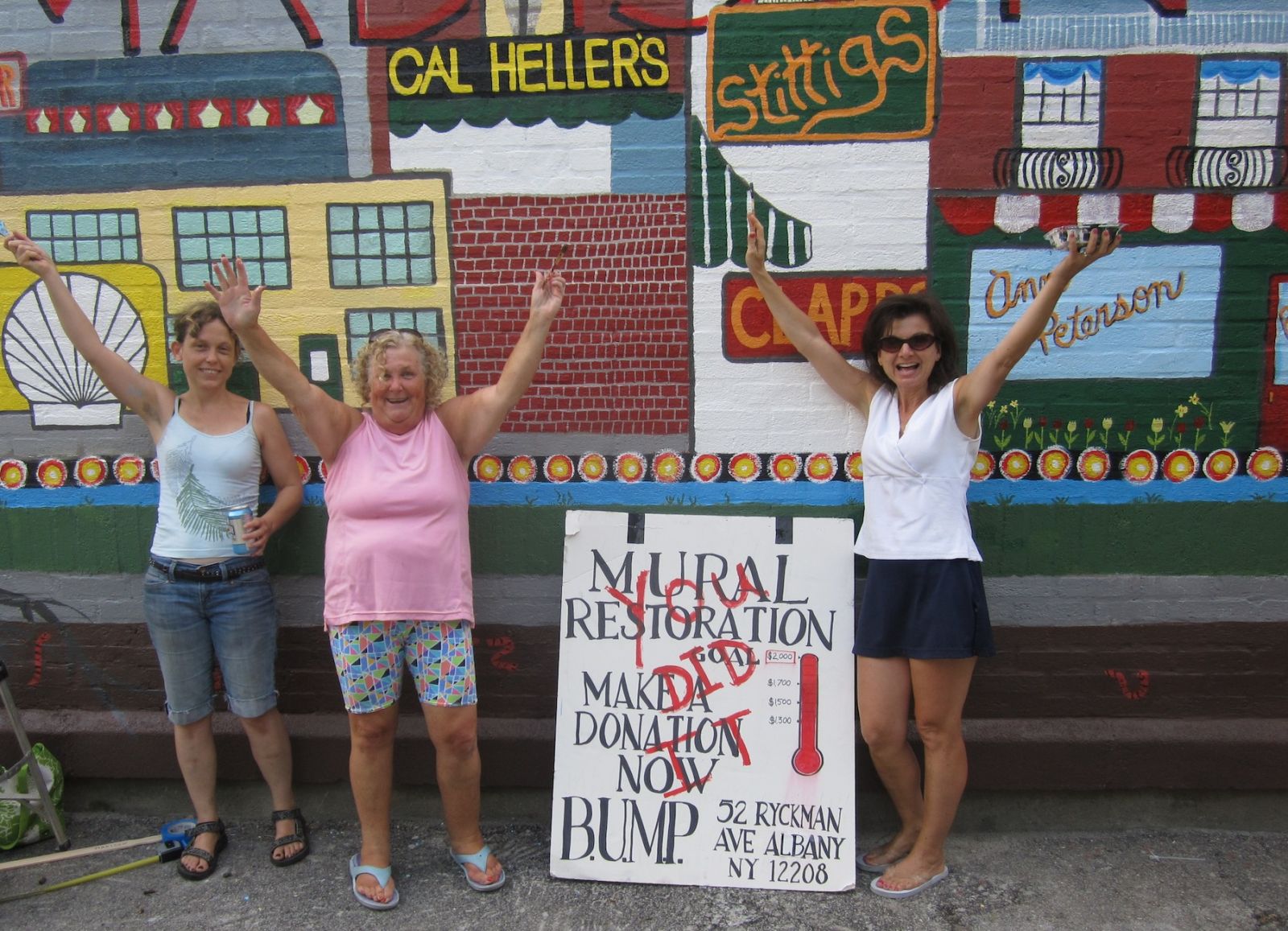